The conference will be held in Davis, California, USA. Davis is in the Central Valley of California, between San Francisco Bay and (very near) the state capital, Sacramento. Davis has a population of about 65,000 residents and is home to the University of California, Davis, one of the 10 campuses in the UC system. 2017 is Davis’s Centennial and also the 50 year anniversary of the city’s, and the country’s, first bicycle lane. In addition, in 2006 Davis was awarded the first Platinum Bicycle Friendly Community award by the League of American Bicyclists which it holds to this day. For more information about Davis, see the comprehensive Davis Wiki. 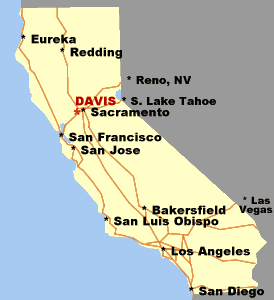 US Bicycling Hall of Fame

The conference’s Friday night dinner will be located at the United States Bicycling Hall of Fame located at 303 3rd Street in downtown Davis. Attendees will be able to tour the hall of fame and the antique bicycle museum. A special exhibit on highwheelers will be displayed during the conference week.

Davis is the preeminent cycling city in the USA. It was the first city in the country (in 1967) to install bike lanes on city streets, motivated by similar infrastructure in Holland. It presently has by far the highest cycling trip mode share in the USA, with about 22% of all trips accomplished by bicycle. There are more bike paths and lanes per capita in Davis than in any other US city, because for 50 years the city has insisted on bike friendly new development, maintaining connectivity to the existing infrastructure. Davis was named as the first Platinum Bicycle Friendly Community by the League of American Bicyclists (LAB). Check out the extensive bike network on the Davis Bike Map.

Events During and Close to the Conference